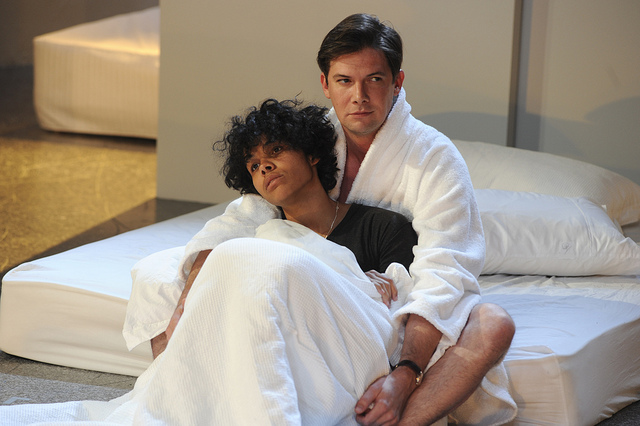 Love… it ain’t all electric butterflies, gooey glances and ecstatic round-the-clock humping. More often than not, a head-over-heels romance comes with a side order of jealousy and insecurity – if not downright paranoia. Psychologists have compared the brains of those in the throes of passion to people suffering from obsessive-compulsive disorder. That’s right, being in love makes you bonkers! No wonder it makes such great fodder for drama; love is about as dramatic as two people can get.

Crazy love is the undeniably scrumptious premise of Noel Coward‘s 1930s classic Private Lives. A former husband and wife, Elyot (Toby Schmitz) and Amanda (Zahra Newman), bump into each other at a seaside hotel while honeymooning with their new partners. It doesn’t take long before that old spark has turned into a forest fire and the two are inexplicably running off to Paris in the middle of the night. Their poor, bereft and much saner spouses Sibyl (Eloise Mignon) and Victor (Toby Truslove) are left to ponder how it all could have gone so terribly wrong so horribly fast.

This is a trailblazing Belvoir directorial debut for the company’s young-gun artistic director Ralph Myers. Out go the smoking jackets, the gramophones and, yes, even the accents. In go fluffy white bathrobes and a vinyl collection ironic enough to make any Surry Hills hipster snigger – think air drumming and lip-synching to Phil Collins In The Air Tonight and a dash of Sinatra’s The Girl From Ipanema. Myers abandons all the old clichés, plonks the actors on a stark white motel of a set in the here and now and lets them wallow blissfully in the sheer lunacy of it all.

He’s made interesting casting choices, too. Newman and Schmitz are an unlikely duo in the chemistry stakes, but this unusual pairing serves to underscore just how crazy this little thing called love can be, and how random. While on the surface they claim to be mismatched, we soon discover they are kindred spirits; feisty, brutal and cunning creatures who relish a verbal stoush and an all-out row even more. The result is delightful belly-buster stuff.

Coward wrote the role of Elyot for himself, so he, of course, gets all the best lines, and Schmitz doesn’t waste a single one. A quick-witted writer himself, Schmitz truly gets comic timing (he proved that rather spectacularly recently with his own play I Want To Sleep With Tom Stoppard) and here he has it down to the nanosecond. This is a real gift of a role for him, one he was born to play. He’s flawless and breathtaking to watch and very, very funny.

Toby Truslove lends wonderful support as the calm, collected and sweetly dull Victor. However, Eloise Mignon’s Sibyl feels a touch forced in her pouty posturing as the ingénue. It would be nice to see her let the lines do the work a little more. And Newman, at times, fails to reach far enough for the dizzying possibilities offered up by the bolshy Amanda.

“It’s a frowsy business, marriage,” Elyot tells Amanda as the two contemplate giving the whole shebang another whirl, for old time’s sake; but there’s nothing even slightly frowsy about this fiercely funny redux of a rip-snortingly brilliant British classic.