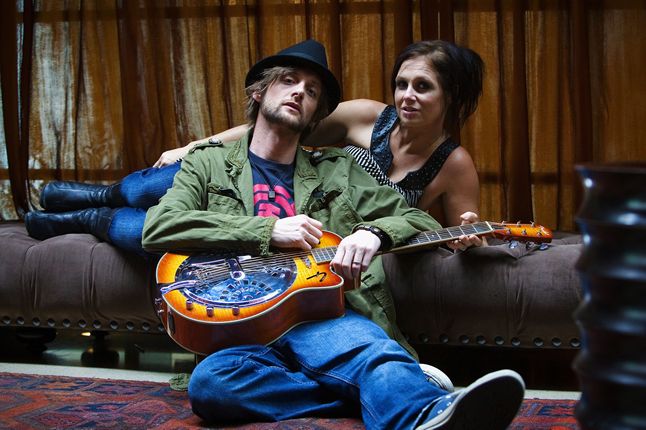 When husband-and-wife duo Shane Nicholson and Kasey Chambers sat down last year and began writing songs together, their attitude was “we’ll just see where it takes us,” says Chambers. Both were already accomplished songwriters in their own right, with Chambers, in particular, a huge presence in country music circles, having notched up three consecutive platinum solo albums. They were feeling relaxed, in love and excited about making beautiful music together.

“We didn’t really tell many people that we were making a record and we didn’t have a record label at the time, so we had no pressure from anywhere,” she says. “And living with someone you’re writing with takes the pressure off, because you don’t have to have something finished by the end of that day.”

But there was one big stumbling block in their path – the writing process itself. “I used to think differently about song- writing. For me, it used to be not so much about the craft, as it was a therapy session. If I was feeling down or confused about something, or just had stuff on my mind, I would sit down and write a song instead of talking to someone.”

Luckily, Nicholson came to the rescue with a new approach. “We had to step outside of ourselves and not write from such an internal point of view,” he says. “We had to verbalise everything we were thinking, and it made it easier to come up with characters.”

Chambers was thrilled with the result and relieved to discover that song-writing could be something much lighter than she’d previously experienced. “It was really fun to learn from Shane, (mostly) about the actual craft… I really enjoyed it. It wasn’t quite so depressing!”

Still, working in a domestic setting posed its own logistical challenges. “We were writing around screaming children,” laughs Chambers. “We were like, ‘You’ve got to drop the kids off at school and then we’ll come back and finish the song’.”

Miraculously, in spite of life’s little obstacles, they managed to write, record and release their ‘rootsy’ first album, Rattlin’ Bones, all within the span of one year. It’s an amazing achievement in itself, but what surprised Chambers even more was the public’s response to it. “I can’t believe that this album debuted at number one [on the ARIA charts]. I mean, that’s pretty weird for an album of this style.”

But the couple certainly aren’t complaining. Coming off the back of a nation-wide tour supporting the album, they’re about to share the stage for a special performance of The MAX Sessions, filmed at the Opera House and screening exclusively on MAX in August. “I’ve played The MAX Sessions before, and I just loved it,” smiles Chambers. “It’s still one of the best gigs that I’ve ever done.”

And she’s looking forward to taking to the stage in spite of any nerves that a live television recording of this scale might create. “TV things usually freak me out, but at least if you’ve got a live audience you think about them and you don’t think about the cameras.”

Most thrilling of all for Chambers is the achievement of a long cherished goal that the two have had since this album’s inception.“We didn’t know if we were going to get many opportunities on a record quite like this one, but we said, ‘If we get to do one thing, can we please try our hardest to get The MAX Sessions, ’cause it just feels like this record would really suit that style of gig’. So we’re really looking forward to it.”