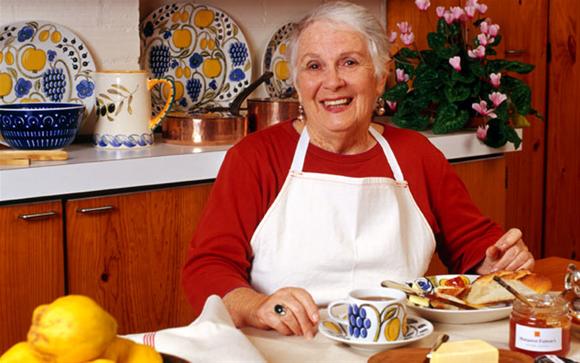 She was the first Aussie food writer who dared us to be different. We catch up with the delightful doyenne of Australian cooking, Margaret Fulton, as The lifeStyle Channel assembles an all-star cast to celebrate her 85th birthday.

When I look back the only thing I remember is that when I started doing food everyone thought I was crazy.

Obviously you didn’t have celebrity superstar chefs back then…

Oh, heavens no! It was a totally different world. It was during the war, so all the girls I knew wanted to get a nice American who would give them silk stockings and get married.

So why do you think you were different to them?

I think I was a sort of a funny person in that I often went against the grain. My mother was very supportive and I just found that it was fascinating doing this, doing food.

What caused Australian food tastes to move on from the traditional meat and three veg?

During the Second World War, women started working in factories. You know, you might be canning peaches and there would be a lovely Italian girl next to you who was also canning peaches [laughs] and the Italians would say, “What are you having for dinner tonight?” And they’d be having exciting things, and the [Australian’s would think], “Oh why can’t I cook that for dinner?”

So Australian women were ready for something new?

Yes! We come from adventurous stock. You see, things like this didn’t happen in America and didn’t happen in England. Communities are still cooking the way they’ve always cooked. They haven’t absorbed other methods of cooking, whereas in Australia we’re a sort of a give-it-a-go country.

What excites you about Australian cooking today?

I thought that Masterchef was marvellous. My cardiac specialist has put in a kitchen and he wanted a steamer and he wanted this and that and I kept thinking, “Why don’t you stick to what you know?” [laughs]. And that’s what pleases me more than what the chefs in different restaurants are doing; the fact that the Australian public are doing this, that professional people in other fields are turning to cooking.