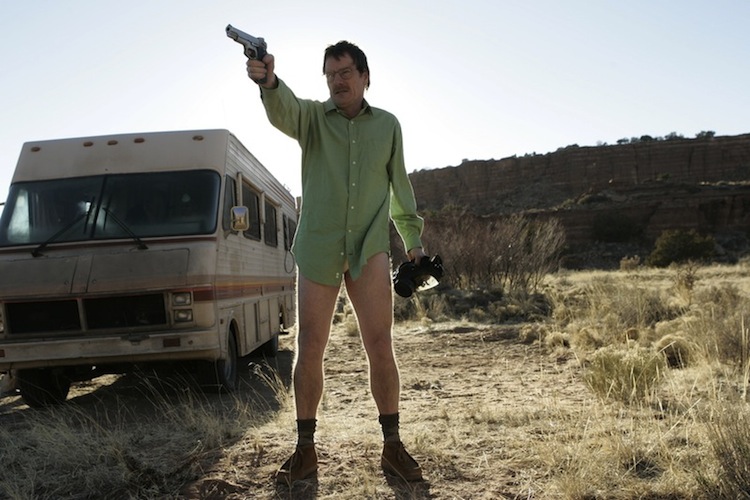 Walter White is having a midlife crisis that’s like a rash – it’s spreading. Already struggling to make ends meet, when the high school chemistry teacher finds out he has terminal cancer, he does the unthinkable – he teams up with the local drug dealer to start cooking crystal meth.

We catch up with former Malcolm In The Middle star Bryan Cranston to find out what life is like on the dark side as he takes on the role of Walter White in Breaking Bad series one.

What attracted you to this project?

The thing that leaps out at you about Breaking Bad is the script. Surprisingly most scripts that actors get are not well written, so when you do stumble across one that is you go after it like a tiger.

The comedy in this show is very dark. Was it hard to get the balance right?

Comedy is a very subjective thing, and there are some people who will watch the show and not really get that there are moments sprinkled throughout the episodes that really are intended to be lighter or humorous… A lot of times [in real life] you have two people at a cafe and on the street they’ll see someone trip over a sidewalk and fall down. And one person will crack up laughing and the other person will be aghast, ‘Oh that’s horrible!’ They just witnessed the exact same thing, and one person’s laughing and the other’s not. And it just goes to show you how different we are and how differently we’re wired as human beings.

Was it important for the audience to like Walt from the beginning?

Well, I think the whole series hinged on Walt being likeable and if he wasn’t the series is over. And Vince (Gilligan, Breaking Bad’s creator) and I talked about it at length, [and we decided that we had to] make him real and set the circumstances, the conditions of his life so people can relate to them, and if he handles that in an honest way I think people will like him.

It seems like shows where we empathise with the ‘bad’ guys are on the increase. Why do you think this trend towards darker heroes is happening now?

I think what’s finally happened is we have now come to embrace characters as we would embrace our own humanity. It used to be if you’re a good guy, then you’re a good guy all the way and every trait about you is good and that’s too black-and-white. Ultimately I think people realise that’s a fantasy world, and in the real world we have much more of a colour palette to deal with… By having the courage to show that, you get more people relating to what they’re seeing.

Do you think this show proves that anyone will do anything if they are desperate enough?

I do think that there are people who, if pushed in a corner, become extremely dangerous, and they can be the most mild-mannered type of person you’d ever know. I think anyone pushed to their limits could be a dangerous person and that’s what’s fascinating about this story.

Turning a mild-mannered man into someone who makes and sells drugs could be interpreted by some as dangerous territory. How do you respond to the show’s critics?

We were talking about the comedy earlier… if you choose to laugh, fine; if you get angry at us, fine; if you accuse us of promoting crystal meth, that’s your opinion as well. I can dispute that and defend that we’re not doing that, but it’s dangerous. It’s dangerous work in the sense that it’s emotionally dangerous, and danger is always exciting [laughs]. Danger is my middle name.