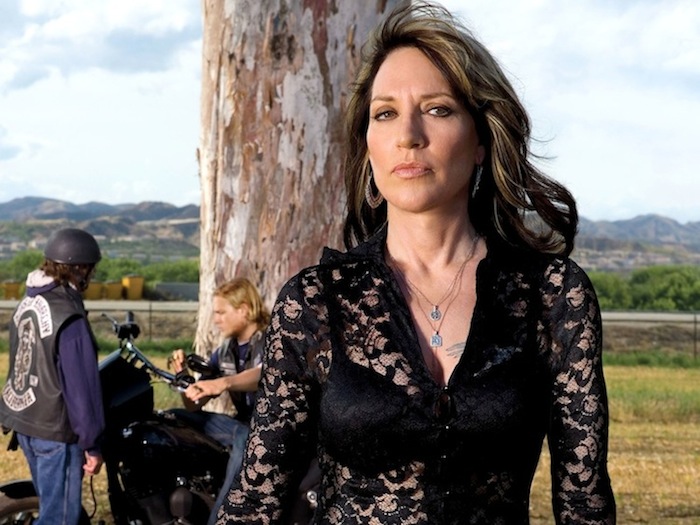 She won fans as housewife Peggy Bundy in hit sitcom Married… With Children, now Katey Sagal explores the dark side of motherhood as a motorcycle-club matriarch in the new series Sons Of Anarchy.

Your role as Gemma Teller Morrow in Sons Of Anarchy was written for you by your husband, Kurt Sutter, is that right?

Yes, that’s correct. He said, “I have a part in it that I want you to play”, but he didn’t really tell me what it was. I knew that it took place in the motorcycle world and I thought it was a fantastic part when I read it. I was looking to do something more dramatic and this is definitely more dramatic [laughs].

She’s a real piece of work isn’t she? What did you like about her?

At the end of the day, Gemma would do whatever it takes to protect her family, her son as well as her club – which is part of her extended family. She’s like the queen bee. So I liked that about her. She’s a “scrapper” you know? She’s somebody that has probably had to make her way most of her life just on her wits.

How does being a mother yourself help you relate to her?

I have a very strong maternal instinct. I mean, you wouldn’t want to cross my children. I don’t think I’d put a gun to your head like Gemma might, but, you know, anybody who’s got children can relate to that.

Has it been fun playing her?

Oh yeah, she’s very fun. You know, we all have dark impulses, all human beings do. So it’s fun to explore them in a very upfront-and-centre kind of way.

Were you worried at all about how audiences would respond to her after Peggy Bundy?

I wasn’t worried. I think people know that this is just one character. And I don’t think anybody is going to go, “Oh no, she can’t do that”. I think people are smarter than that.

How do you think Australians will respond to the show?