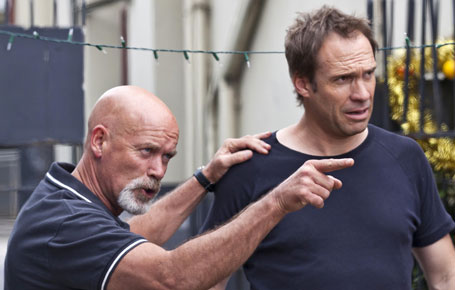 While criminal underworld exposés are the television genre du jour, Movie Extra’s Small Time Gangster is decidedly different. For starters, it’s a black comedy. “The original concept came from my abiding love of old crime movies,” explains co-writer and producer Gareth Calverley. “A few of the filmmakers I like had always made films that focused on the blue-collared guys.”

With this in mind, Calverley and collaborator Joss King invented Tony Piccolo, a Melbourne standover man who hides his real profession from his family by moonlighting as a carpet cleaner. “He’s trying to juggle these two lives and, of course, it all comes crashing down,” says Calverley.

Featuring a top-notch Australian cast including Steve Le Marquand, Gary Sweet, Gia Carides, Sacha Horler and Geoff Morrell, Small Time Gangster is aiming for something much more intriguing than your average straight-up comedy. “We’ve taken a look at the two worlds, the crime world and the suburban world, and heightened the situation by keeping the actors grounded to the core of their characters,” explains director Jeffrey Walker.

He describes the end result as something in the vein of the Coen Brothers. “The series is intelligently written, it’s subtle on the whole, and there’s plenty for audiences to enjoy.”

It’s this meeting of the mundane set against the backdrop of crime that gives the show it’s unique flavour. “Juxtaposing what people do for a living with ‘did you get the milk, by the way?’ is kind of interesting,” says actor Geoff Morrell, who plays Tony’s mentor, Les.

For Aussie film buffs, one of the show’s drawcards will be seeing actor Steve Le Marquand (Two Hands, Last Train To Freo) in a long overdue leading television role as Tony. Plus there’s Gary Sweet as the menacing mob boss Barry, Gia Carides as the streetwise underworld go-between Darlene and Sacha Horler as suburban mum, Cathy.

And for those of you who want to see some action, this eight-part series will not disappoint. “We’re doing scenes with rocket launchers,” enthuses actor Jared Daperis who plays Barry’s wannabe gangster son, Charlie. “We’re used to the true crime genre, but this is just bold and adventurous.”

Q & A with Steve Le Marquand

Your character Tony is leading a double life and there are a lot of balls to juggle… It’s kind of like playing two characters, which is what I love about it. You’ve got the family guy, who’s a loving husband and father, and on the other side of the fence you’ve got this guy working as a standover man for this bunch of hardcore crooks. He’s obviously switched-on to be able to keep those lives separate for so long. It’s not until a series of unfortunate events causes those two worlds to collide that things start to get a bit hairy for him.

Was the whole gangster thing something you got right into? Absolutely. But the far more challenging stuff for me was actually playing the loving husband and father; it’s very rare I get cast as the gentler guy.

Q & A with Sacha Horler

This is a different character for you… Cathy’s a good girl. It’s interesting for me because I don’t usually play ‘lipstick roles’. My husband said, ‘what are you doing? Have you got your no make-up dirty scrag look going on?’ and I told him, ‘no, in this one I get to wear nice dresses and they put lipstick on me’.