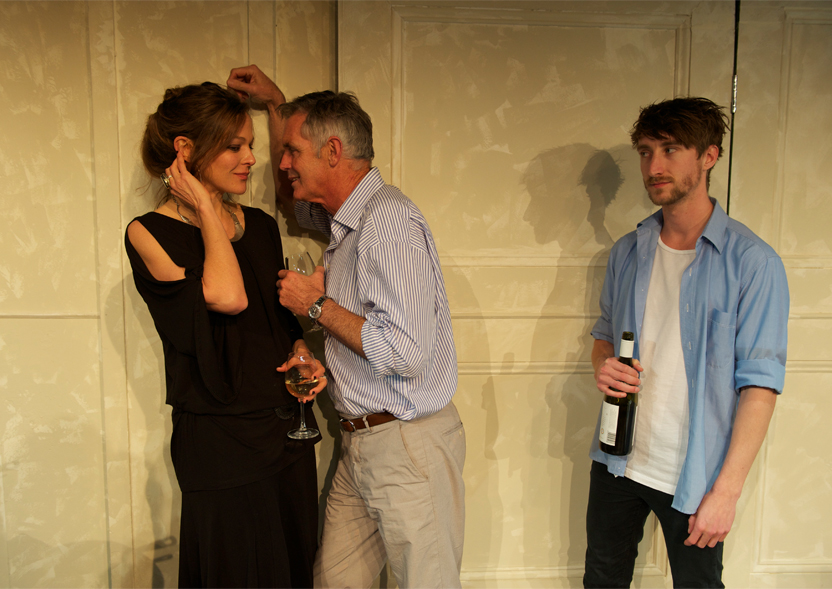 How’s this for a play pitch: the scene opens on a dinner party at the home of a couple of wealthy theatre subscribers. Their son, an actor whose career choice they view as dubious, unintentionally invites his older actress girlfriend, a flirty drama queen, and as the booze flows freely the spirited table talk naturally turns to the theatre – it’s relevance, or lack thereof. Sounds like a cure for insomnia, doesn’t it? And in the wrong hands, it could very well be the worst kind of entertainment: snobby, self-reverential, a real snore. It could have been an absolute disaster, a play about theatre… what was playwright Toby Schmitz thinking?

Luckily, the man who the media can’t run out of plaudits for delivers the goods with I Want To Sleep With Tom Stoppard. Better than that, Schmitz delivers them with a seamless wit and raging intellect, far beyond his 35 years. Yes, I know, it sounds like I’ve joined the slobbering throng – but really, he’s achieved an astounding feat that shouldn’t be underestimated, because by sidestepping an elaborate set up and settling for something insanely simple and obvious, with very little action and wall-to-wall chatter, Schmitz has been very, very brave. If his dialogue wasn’t as sparkling as a bottle of Dom Pérignon (and just as tasty and sophisticated) there would have been nowhere left to run and hide. In a sense, he is standing balls-out naked in this play and for that he truly deserves the rapturous three rounds of applause this play received when it premiered earlier this week at the Tamarama Rock Surfers’ Bondi Pavilion theatre.

So how does Schmitz do it? By writing about what he knows, the lunacy of what it’s like to be an actor and having to justify that career path to your nearest and dearest and society as a whole. It’s that intimate understanding that’s allowed him to create beautifully observed characters that are as real as they are stereotypical, and from that juxtaposition springs the play’s delightfully edgy humour.

From the outset, when Luke (Tom Stokes) makes the fatal mistake of inviting girlfriend Sarah (Caroline Brazier) around for dinner, there’s a delicious anticipation. We can’t wait for the fun to begin and begin it does, instantly. There’s no wasted set up or drag, we are smack bang into this ‘kitchen sink’ drama of First World problems.

And the elephant in the room, the absence of Tom’s gay brother, keeps us hooked with ‘will he/won’t he appear?’ tension that’s beyond thrilling.

Parents Jackie (Wendy Strehlow) and Tom (Andrew McFarlane) embody the worst and funniest upper-middle-class clichés: she does yogalates, he builds miniature battleships. They have a Whiteley in the hall (of course) and a yacht, and a water view. But it’s in their unrequited dreams (Tom settled for the mundane moneyed life of a dentist, Jackie could have been an actress) that we find a truth that’s sympathetic and powerful – they are also both rip-roaringly funny.

McFarlane is side-splitting as the posturing, know-it-all patriarch and Strehlow is endearing as the long-suffering, affluent housewife whose hobbies are her children – although one of these ‘hobbies’, her estranged gay son, seems to be troubling them more than they’ll both admit. This is an undeniably clever comedy of appearances, and while the debate on the surface revolves around the worth of acting, film and the theatre, and is stimulating and astute, the discussion is a conduit through which the inner depths of these characters emerge.

Bold, brash and magnificent in her captivating unravelling is Caroline Brazier as girlfriend Sarah. Schmitz‘ goal was to create a complex femme fatale and she is beautifully realised, thanks in no small part to a sensitive and intelligent treatment of the material by director Leland Kean. Brazier can do loopy leading lady on her ear, but it’s the subtle way that her performance simmers slowly until it soars clean over the edge that makes her so enthralling.

Tom Stokes’ Luke functions as the straight role, and that’s no mean feat with so much funny business going on around him. He keeps things rooted in the real so that the comedy doesn’t careen too far into farce.

Natalie Hughes and Vanessa Hughes have designed an elegant and versatile set that accommodates the intimate action well. Their Battle of Copenhagen in miniature is a tiny triumph that exceeds expectations. And Jeremy Silver’s sound design gives the play a super-hip vibe, ensuring that while it may make fun of stuffy subscribers, it’s not intending to appeal to them.

“I Want To Sleep With Tom Stoppard,” shrieks Sarah in a moment of hilariously insane lucidity that encapsulates why this play is so much more entertaining than the kind of theatre you would dutifully attend. And that appears to be Schmitz‘ ultimate point; theatre can be as relevant as it chooses to be – if the people who make it work hard enough to keep it that way, and these people most certainly have.