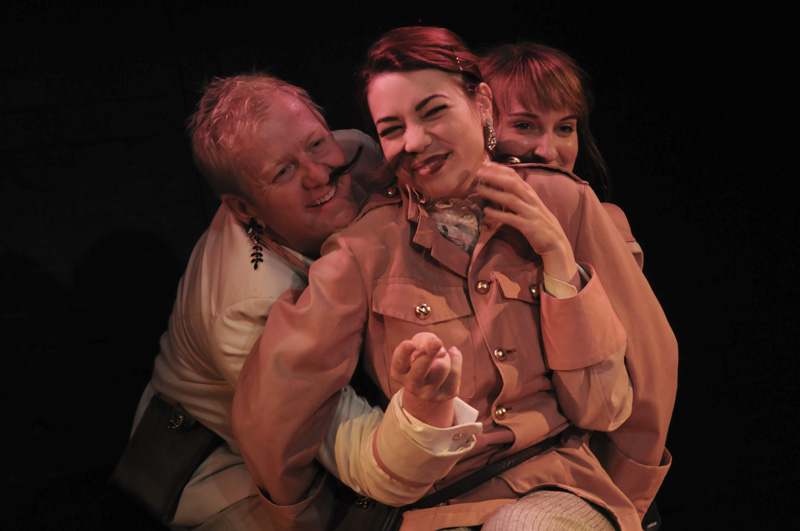 What a novel idea (pardon the pun), take four short stories of the same title, The Kiss, by four different writers and deliver them to the downstairs Belvoir stage unabridged and “untampered” with. Think of it as a kind of literature-meets-performance experiment. Of course, much like most great scientific breakthroughs, with this kind of thing there’s always the equal chance of discovering something that will change the world as there is of creating a monster. And, so it is here.

Nineteenth-century French writer Guy de Maupassant’s take on sexual politics opens the evening in somewhat pedestrian style. Here a woman’s power is measured in the volume of her caresses and the weight of her ultimate weapon, the kiss. It’s a straightforward adaptation job – not rocket science – as the story is a first-person monologue. Rita Kalnejais delivers it word for word with a twist of sexual tension (an interesting choice considering the final reveal of the narrator’s identity) as she wriggles and twists in her chair – we’re not really sure why, but at times it’s distracting. And this brings us to our first inkling that adapting a short story directly for the stage – with no chopping or changing or “mucking about” as it were – has one big problem, it’s going to require a high degree of concentration from the audience. Sure, you could argue that you have to expect to be more actively engaged when you go to the theatre than say, blobbing in front of the TV – and that would be true, but usually the theatre draws on a variety of senses to engage you, and actors become the characters through the use of a nifty little thing called “dialogue”. Unfortunately here what we are offered is an evening that relegates them to narrators of their own fate, trapped forever in the third person and we listen, listen and listen as they describe things they could actually be doing or showing, in other words, acting.

That said; Aussie writer Peter Goldworthy’s heartbreaking tale of lost mateship, the second piece of the night, manages to transcend this to become the most successful adaptation of the evening. It’s got some great writing, but largely the triumph is down to the actors, Steve Rodgers and Yalin Ozucelik. They are able to move, to “swim” through the air suspended above the stage, creating an enchanting visual element that strengthens the prose rather than distracting from it. It’s a nice choice from director Susanna Dowling to give the actors something to “do”. The result is a blending of the images that form in the mind as we listen with the action taking place on stage. It’s a kind of active imagining that makes the whole night worthwhile – and Steve Rodgers is, it has to be said, magnificently riveting.

There’s a lovely comedic quality created in Kate Chopin’s story of love versus money, thanks mainly to an inventive juxtaposition of facial gestures with the lines of the text. It’s short and sweet, but again we’re aware of the dislocating affect of actors speaking in the third person, being separated from their natural environment: dialogue, embodied and freely expressed.

In the Chekhov piece the same frustration builds, but by now the story’s sheer length (unabridged, remember?) combined with the fact that it’s the end of the night amplifies the demands on the audience’s attention further still, and despite earnest efforts to maintain focus you can sense the crowd shuffling in their seats, the experiment has worn them out and they’ve come to the end of their tether. It’s a shame really. It’s an interesting idea with a nice bunch of actors all working their guts out to deliver, but rather than breaking the mould to bring us something splendid, instead The Kiss only serves to highlight how wonderful plays already are and that the form itself has a great deal to do with that.

Lost also is the theme that ties the whole night together. As fellow theatre critic Augusta Supple (who just happened to be sitting beside me) whispered in my ear as the lights came up, “Less talk, more kiss.” Indeed, no-one could have summed it up better.

This review first appeared on Australian Stage May 2011